‘There are two distinct impulses behind this remarkable revival of Arthur Miller’s most famous play. One is to make it a story about the travails of a black Brooklyn middle-class family. The other is to remind us this is a non-naturalistic drama originally called The Inside of His Head. The two ideas sound contradictory but are skilfully reconciled thanks to an inventive, if overlong, production by Marianne Elliott and Miranda Cromwell and fine performances from a cast led by The Wire’s Wendell Pierce and Sharon D Clarke.’

‘One or two details strike me as odd: would Willy, in 1940s Massachusetts, have risked a secret affair with a white woman? But this is an imaginative production that allows one to see a familiar play with fresh eyes. As Willy, Pierce avoids easy pathos to present us with a man torn between private guilt and public anger at the hand life has dealt him.’

‘We’ve seen many good productions of DEATH OF A SALESMAN over the years. This one, mixing the socially specific and the dreamily phantasmagoric, depicts the duality at the heart of Miller’s memory-play with exceptional clarity.’

‘We’re told this is the first time London has seen a black actor take on this Everest of a role. On paper, then, Marianne Elliott’s production (with co-director Miranda Cromwell) makes history. But such is the meticulousness of the creative approach – matching the intelligence of Elliott’s reinvention of Sondheim’s COMPANY – that the evening proves a landmark one on account of its revelatory power: it brilliantly argues the case for the Lomans to be ‘translated’ into a striving African-American family.’

‘Oscillating between stoical serenity and flashes of anger, part teddy-bear part tyrant figure, Pierce at one point vents his frustration on Arinze Kene’s Biff by placing angry emphasis on the word ‘boy’; that word gives you a note of inherited self-loathing. Note being the operative word; there’s a fine musicality to this production – bluesy music steals into it, phrases sounded in the reveries into which Loman loses himself are sung, a gospel number becomes a soulful motif.’

‘Wendell Pierce is riveting in the lead — a man who in his mid-sixties becomes painfully aware that he has built his life on sandy ground. From the outset his movements suggest the shambling exhaustion of a lost bear, and Pierce is good at conveying an air of crumpled defeat. But he also nails Willy’s tyrannical qualities and the sudden bursts of enthusiasm that mark him as a hopeless fantasist.’

‘Co-directors Marianne Elliott and Miranda Cromwell aren’t the first to make the Lomans an African-American family. But this choice gives an extra frisson to the story of their ambitions and disappointments in Forties Brooklyn. And while this isn’t as bold a reinvention as Elliott’s recent radical take on Stephen Sondheim’s COMPANY, she and Cromwell have crafted something fresh, compassionate and ultimately devastating.’

‘The casting is spot on. Willy is played by Pierce, the beloved Bunk of The Wire fame, with a soul-reaching grasp, one moment reaching for the stars, the next shouting into the gutter. The indomitable Sharon D Clarke makes the part of his loyal wife Linda into something special, her singing weaving its own spell at times. Their screw-up son Biff is played by charismatic Arinzé Kene (mostly in a vest) while Martins Imhangbe goofs around as the younger Happy who only really lives up to his name when he’s chasing women’ 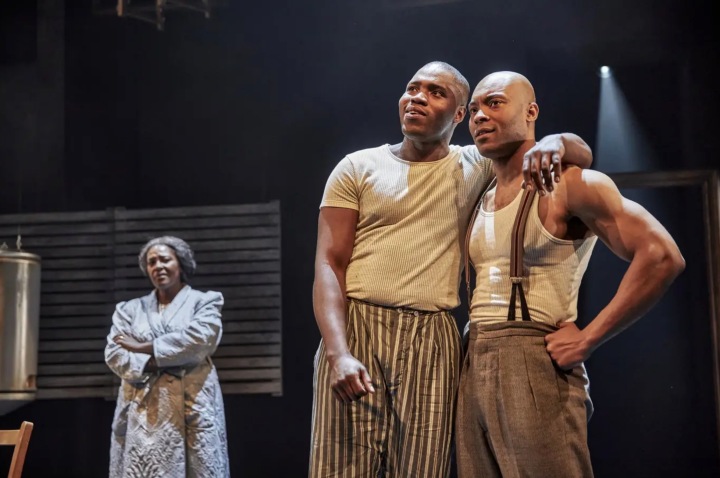 ‘(Marianne Elliott’s) production of Arthur Miller’s play, co-directed with Miranda Cromwell, is turned into an African American tragedy. The result is a transformative, brilliant staging which offers a dazzling new look at a dazzling play, demonstrating once that Miller’s words, written in 1949, can speak across ages, times and cultures.’

‘The play remains a delicately observed family tragedy, and it is this terrific cast which makes the complex relationships sing out. Pierce is magnificent as Loman, alongside the controlled and rock-like Sharon D Clarke as Linda. Clarke makes the part her own, demonstrating how Linda’s drive and quiet determination to get what they want holds the family together. At the end, it is her incomprehension of what has happened that is the most affecting. They were so near to achieving their goal.’

‘What really distinguishes the production, though, is the extraordinary sequences set in the depths of Willy’s mind, his guilt-stricken reveries going back to the high school sporting glory days of favourite son Biff (Arinzé Kene), and his agonies over his fleeting connection with his own elder brother, Uncle Ben (Joseph Mydell). I have literally never seen these bits done well before. But here they’re staged with a kinetic Lynchian surrealism, the memory figures surrounding Willy sped up, heightened and jerky. He crashes from one reminisce to another – sometimes with a near indistinguishable intrusion from the present – falling through his own crumbling mind at a terrifyingly vertiginous pace as Anna Fleischle’s dreamy, hypermobile set rises and falls around him. It’s stunning.’